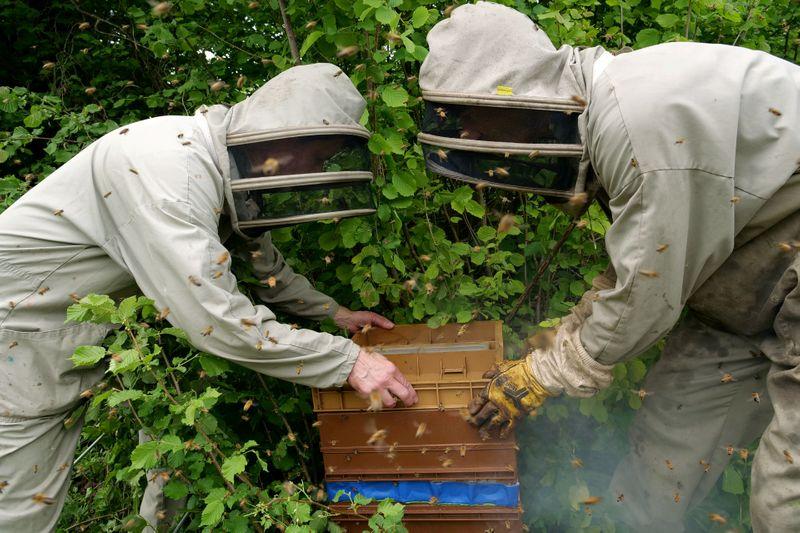 BRUSSELS (Reuters) – The European Commission is seeking to halve the use of chemical pesticides by 2030 to halt the decline of pollinators, in a plan likely to draw criticism both from those urging a phase-out of the substances and from farmers who say crop yields will suffer.

FILE PHOTO: Beekeeper Franck Portefaix and his colleague put bees in a beehive in Chantilly near Paris during the outbreak of the coronavirus disease (COVID-19) in France, May 4, 2020. Picture taken May 4, 2020. REUTERS/Noemie Olive/File Photo

The Commission, the EU executive, wants to commit the European Union to a halving of the use of chemical and “high-risk” pesticides by 2030, a draft document seen by Reuters and set to be published on May 20 showed.

It did not explain what it meant by high-risk or how it would enforce the reduction.

The Commission declines to comment on unpublished drafts, which are working documents and are subject to change until they are adopted.

A Commission plan to make agriculture more sustainable, also due on 20 May, may add details.

Beekeepers in western Europe have reported a fall in the number of bees and colony losses over the last 15 years, the European Food Safety Authority said.

EU lawmakers say this trend endangers the 76% of food production in Europe that depends on pollination.

Already EU regulators banned outdoor use of neonicotinoid insecticides in 2018, meaning they can only be used in closed greenhouses.

Some farming groups have said a wide ban on pesticides could cause crop yields to fall, and urged the Commission to assess the impact of the measures before fixing binding targets.

“We acknowledge calls for pesticide reductions and let’s be clear – we are open to discuss targets,” Geraldine Kutas, director general of the European Crop Protection Association, said. “Targets however have to be realistic and science-based.”

The sugar industry in the Netherlands lost 2.3 million euros ($2.48 million) in revenue in 2019 because of impacts associated with a lack of neonicotinoid use, the International Confederation of European Beet Growers said.

European lawmakers have called for binding targets to cut pesticide use in the EU. Organic food and farming organisation IFOAM is also pushing for more ambitious targets than the draft proposal – an 80% reduction in synthetic pesticides by 2030 and a total phase-out by 2035.

The draft measures have the potential to impact sales by companies such as Germany’s Bayer. A spokesperson for the company said it did not wish to speculate on the content of a draft document.

The draft also includes a goal to plant three billion trees in the EU by 2030, to help absorb carbon dioxide from the atmosphere and make cities greener.